Xian is one of the oldest cities in China and is surrounded by nine miles of city wall. 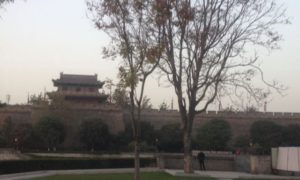 The silk road began in Xian and went through Iran, Afghanistan, and Turkey, all the way to the eastern Mediterranean and Italy.

In 1974, farmers digging a well found the terra-cotta head, and archeologists began to excavate the site. What was once farmland is now a huge city and is one of the primary tourist destinations in China. Between the Xian and Litong (where the warrior museum is located), huge fifteen-story blocks of apartment complexes are being built. 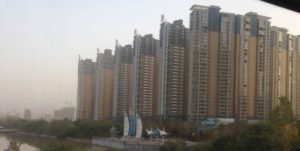 Most are not yet occupied and are called ghost cities because there is no infrastructure, no schools or subway nearby. The apartment blocks may be as numerous as the terra-cotta warriors.

Qin Shi Huang, the first emperor who unified the seven kingdoms, ordered the construction of the terra-cotta warrior army in 221 BC, eleven years before he died. Eight thousand warriors with their weapons, horses and carriages were built in eleven years although the tomb, which covers 565 sq. kilometers, twice the size of Macao, was begun when he was thirteen. Qin, known as the first emperor, standardized Chinese characters, currency, measurements, and laws. Before Qin, when an emperor died, his entire court would be killed with him in order to serve him in the afterlife, often between one hundred and two hundred people. According to our guide, the 720,000 slaves who worked on the tomb were all buried when the tomb was completed.

Each of the terra-cotta warriors is unique, with different facial features. They were coated with lacquer, which was very expensive, and then painted in bright colors. Unfortunately because of the lacquer, the color disintegrates very quickly when exposed to air. The terra-cotta soldiers are about a mile away from Qin’s actual tomb, which has not yet been opened because it is the size of a city and a new museum would be needed to cover it and because high levels of mercury have been found in the soil. The mercury was mined in the surrounding mountains and used to fill rivers that represent the waters of the earth. 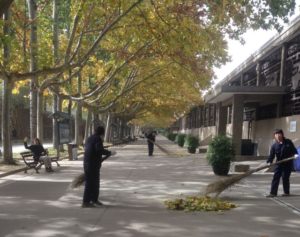 Pit 1 is the largest, holding the bulk of the army. 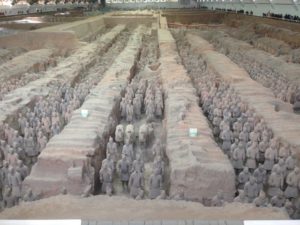 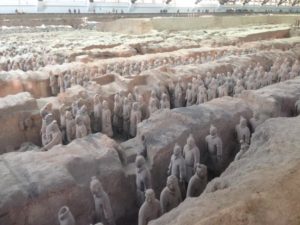 The warriors are arranged in rows with earthen walls between them supporting the beamed ceiling, which was covered with mats and dirt. The entrances were sealed until after the emperor’s death in 210 BC, a revolt happened. The army that revolted against the emperor’s son broke in, stole the weapons, broke the warriors, and burned the complex. 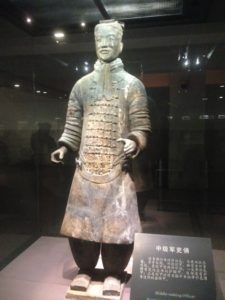 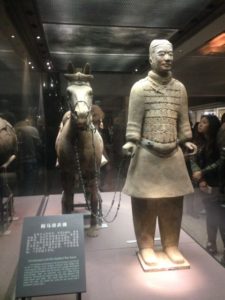 Pit 2 is smaller and houses the archers and cavalry. It also displays several excellent examples of the warriors. The kneeling archer was the only soldier to be discovered intact. Bits of the original color can be seen on the back of the armor, as well as the detail on the bottom of the sandal. 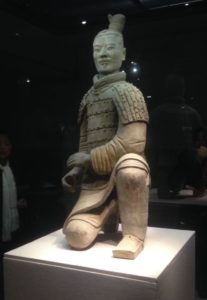 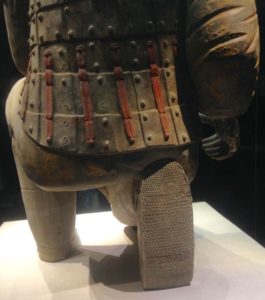 Pit 3 is the headquarters of the army with high-ranking officials and generals. 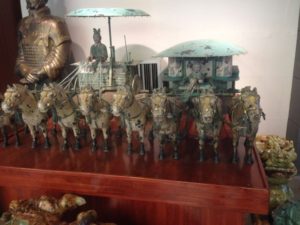 A separate museum houses the two half-sized bronze chariots discovered nearer to the emperor’s tomb. Further excavation of the warriors has been halted until a method of preserving the original colors is developed. There is speculation that similar sized armies might be found on the other three sides of the tomb.

On our way back to Xian, we saw trees covered with persimmons and pomegranates and lots of vendors selling both fruits. 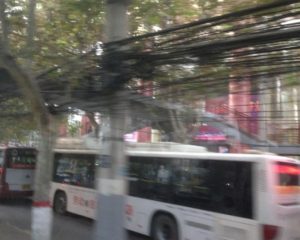 That night we were treated to a dumpling banquet and had the chance to sample 16 different types of dumplings, most shaped like what was inside the dumpling. 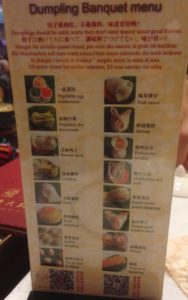 The dumpling banquet was followed by a Tang Dynasty show, quite the extravaganza of dancing, elaborate costumes and music from the Tang Dynasty period from the 7th century AD. 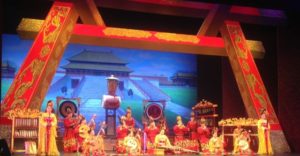 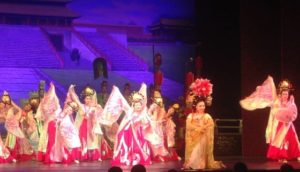