My husband and I owned a piece of property on the edge of town and I thought it would be nice to move an old house out there in order to have a place to camp on the weekends. When I looked at houses the city was giving away, I took a friend who knew carpentry and house restoration with me. All of the houses were low-ceilinged shacks, but he showed me an old house he had his eye on, which was made entirely of heart pine and had ten-foot ceilings. When I found the owner, she said she would give me the house for free if I cleared the lot (she wanted to rent the lot to an equipment company). 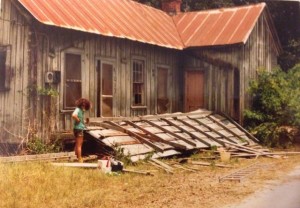 Everyone I showed the house to (including my husband) thought I was crazy, but I took on the project because the house was solid, and I could see what it might become. We started by tearing off both porches and cutting the T-shapped house into two pieces to make it easier to move. 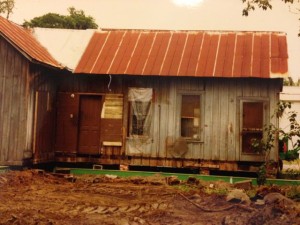 The pieces could then be loaded and moved like two trailers. Getting the house into our  property entailed my buying a chainsaw and cutting an entrance road. This was 1990, and we were able to move the house and have it set on cinderblock piers for a grand total of $3,000. 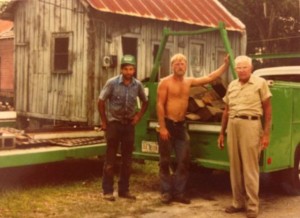 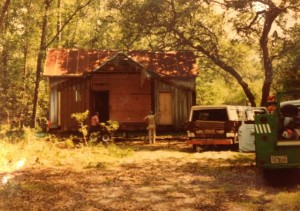 Here, the first section of the house is in place on our property and the second piece is on the way. 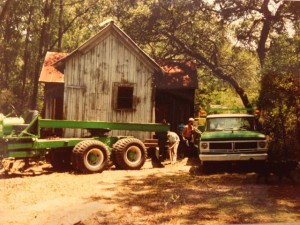 The second piece of the house being brought in

Because the house was so old, we had to tear off every interior or exterior wall in order to be able to replace wiring and insulation. 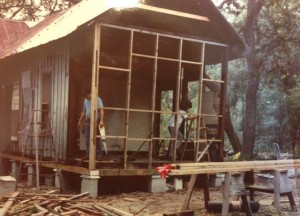 Weather permitting, we worked every weekend we could. It took us just over sixteen months to complete the restoration. Finding Rob Higgins, the master carpenter we worked with for years, was a major move in the right direction. He had the patience to work on an old house (where nothing is square) and with us (willing but not experienced workers). He made the project work. 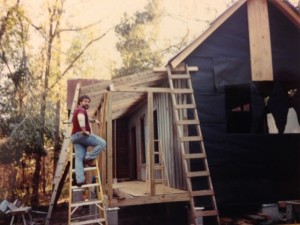 My husband, Steve, working on replacing one of the porches 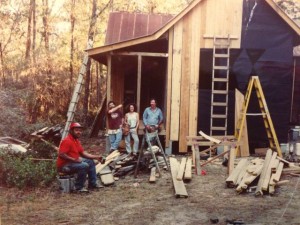 The crew: Steve and I, with Rob Higgins, our master carpenter, and Alvin Nelson, who went by Bobo, a dear man who worked with us for years. 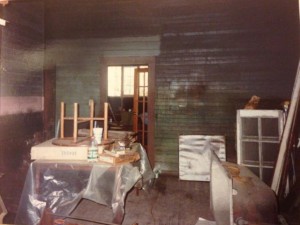 The interior of the house was all bead-board, painted in lovely shades of pink and green.

When we removed a wall between the two front rooms, we discovered there were two different widths of bead-board, so we had to tear the bead-board out and replace it with drywall, but we reused the bead-board in porch ceilings and bathroom wainscoting. 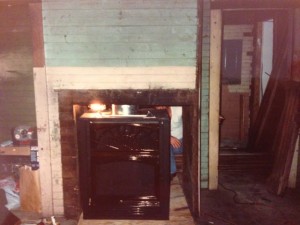 There were two brick chimneys in the house that collapsed when we lifted the house on beams to move it. I had heard stories of people trying to dig into the chimneys in the old house because they believed the man who lived there hid jewels in chimneys. I found what I call my brick pile rubies in the rubble of the chimneys. We replaced them with wood-burning stove inserts that heat the back rooms nicely. 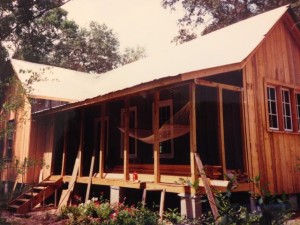 We repainted the old tin roof with silver roof paint and it’s good as new. 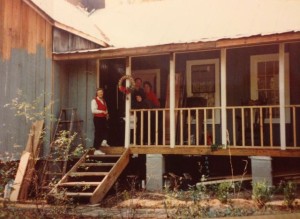 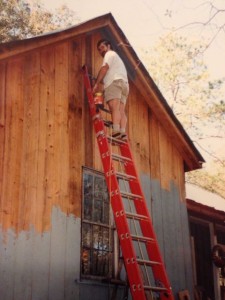 Side of house being painted

Next, we decided we wanted to add a sunroom on the back of the house, and our friends showed up to help with the work. 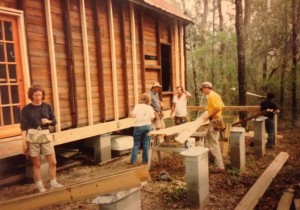 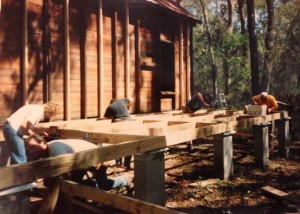 The framework went up in one day. 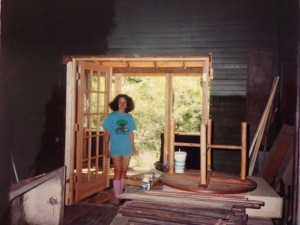 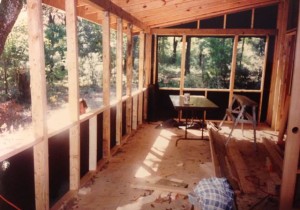 The sunroom brightened up what was otherwise a dark interior. I bought old windows for $3 each, ordered crank hardware online and installed the crank-open windows between large sheets of fixed glass for an inexpensive room full of windows. While we were framing the sunroom, a neighbor suggested we frame in a door because surely we were going to add a deck off the back of the house. We took his advice and added a door, which meant our next project was to add a large deck built around the live oak behind the house. 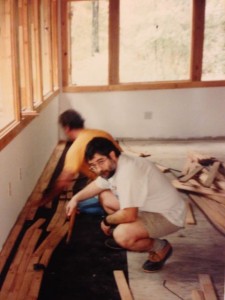 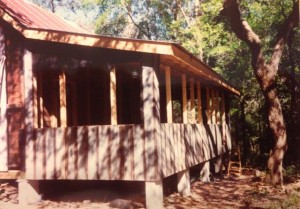 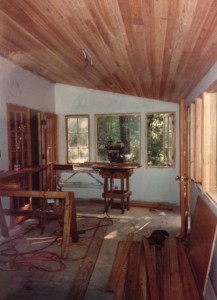 Ceiling and floors and windows, oh my! 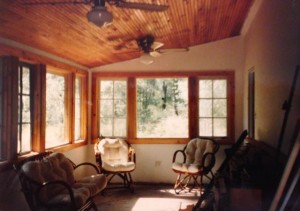 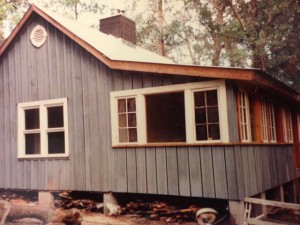 Finished back of house

When we were ready to add a deck on the back of the house, once again our friends and family showed up to help.. 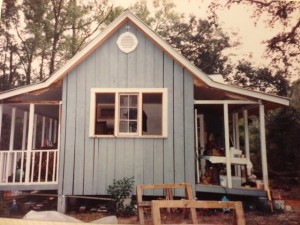