On May 15, 2017, my son JP, his girlfriend Kaylea, and Steve and I head to Shannon for a one week indi trip to Southwestern Ireland, flying in and out of Shannon and staying in Boland’s B&B in Dingle Town for two nights while we tour the Dingle Peninsula, and The Old Church House B&B in Kenmare while we do the Ring of Kerry, and finally Fitgeralds Woodland House in Adare for two nights. 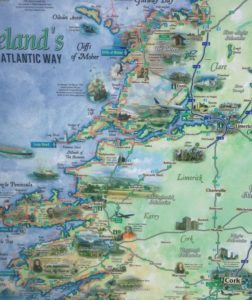 The trip, which I booked through Great Value Vacations, a trip I saw advertised on Travelzoo, includes the flights from Orlando, the hotels, and a rental car for six days for around one thousand dollars each. It was a good deal until I upgraded to an automatic car, for me a necessity since we will be driving on the left side in Ireland and the idea of shifting with my left hand is way too complicated. I was told that the upgrade would add over $400, not including insurance (another $200), all which seemed excessive. I checked Dan Dooley rental cars online for Shannon airport and found that an automatic for the period we would have the car was less than 200 Euros. When I called Great Vacations back, they insisted that they had no control over the cost of the rental car and they had no way to alter the price. It strikes me that someone is making an unfair profit somewhere, but I couldn’t get to the bottom of it and decided to bite the bullet and pay for the upgrade rather than spoil the vacation with the added stress of trying to shift with my left hand

About twenty minutes from Shannon airport, Bunratty Castle is one of the best restored and furnished castles in Ireland. The original Dirty Nelly’s, built in 1620, sits between the Shannon and the castle. 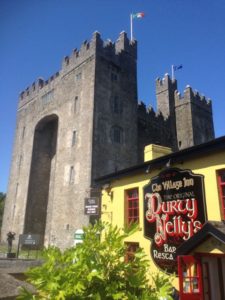 Four castles were built by Normans and destroyed by the Irish between 1250 and 1353. The MacNamara clan built the present stone castle in 1425 but  by 1475, it was taken over by the O’Brien clan, which were given the title Earl of Thomond by Henry VIII in return for their oath of loyalty. Their reign came to an end with the arrival of Cromwell’s troops and the castle was subsequently granted to several Plantation families, the last of which abandoned the castle in 1804. The castle was purchased in 1945 and was restored and opened to the public in 1962. The many interior rooms give a feel for what life would have been like in the 1400 to 1600s. 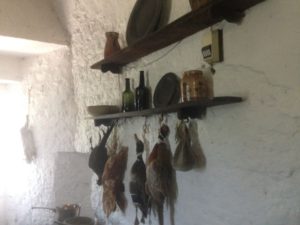 The Folk Park adjacent to the castle offers a glimpse of 19th century Irish life with over 30 restored buildings. 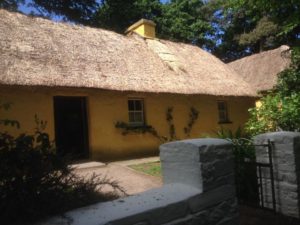 When we were there, the wisteria, horse chestnuts, roses, lupines, foxglove, and hundreds of other flowers were in bloom. 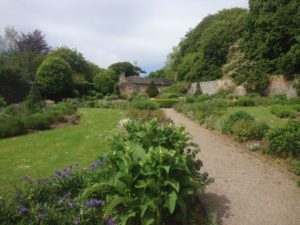 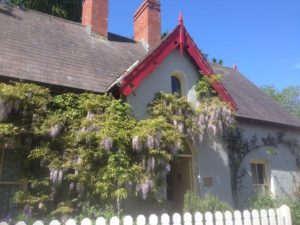 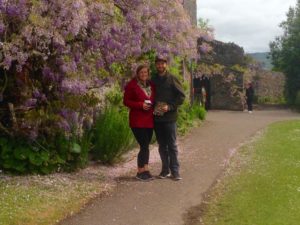 Costumed interpreters recreate the life of an Irish village. This woman made and baked scones on a griddle over coals. 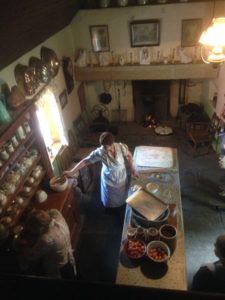 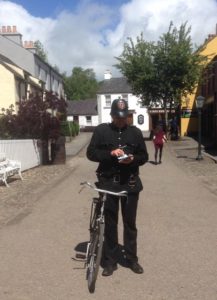 The drive to Dingle was a little over two hours, but for someone not used to driving on the left or on such narrow curing roads, it is a white-knuckle experience. We checked into Boland’s B&B, showered and napped before going out to a dinner of local lamb and seafood at Paudie’s Bar on the waterfront, where we listened to several hours of great local music.