We arrived in Venice at 6 pm. Walking out of Santa Lucia station onto the Grand Canal is a remarkable sight. Vaporettos are cruising the canal and you face the majestic white columns and dome of San Simeon Piccolo.

Our hotel, Carlton Grand Canal, was just over the bridge. It is a gorgeous hotel with Murano glass chandeliers (even in our room, which had gold brocade walls and antique furniture). 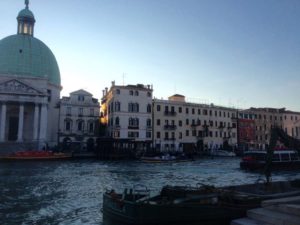 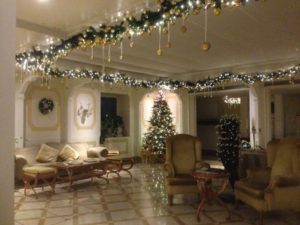 We walked toward town on the Lista Di Spagna, the main artery toward San Marco on the train side of the Grand Canal. It was in the high 30’s or low 40’s, so we were glad to have gloves and hoods.

Gate 1 arranged a walking tour for us the next morning, and our guide took us to a private launch that took us through the Grand Canal and out to Murano. The Venetian Lagoon is the larges in the Mediterranean and it is connected to the Adriatic Sea so it is subject to two tides a day. The lagoon has 120 islands and 120 churches and somewhere over 400 bridges. The population of Venice today is below 55,000 and they are losing 1,000 residents a year because prices are so high. Over 1200 apartments are vacant and many are being converted into hotels or rented as tourist apartments. In the summer, Venice is inundated by tourists, in part because the port can now accommodate as many as ten cruise ships.

Venice was founded in 621 when people settled on Torchello to escape attacks by Barbarian. When the population reached 20,00, they moved to Venice. In the 1500’s Venice had a population of 350, 000 and the third great plague killed 150,000.

Aqua alta or high water is a regular event in Venice during the winter. An alarm sounds two hours before the tide and the number of tones tell how high the tide will be. San Marco is the lowest part of the city and the first to flood at 79 feet above sea level. During high water, the entire city can flood, and there are platforms staged all over the city that can be deployed for people to walk on.

We were treated to a glass blowing demonstration at the Ferro & Lazzarini factory, the oldest in Murano. 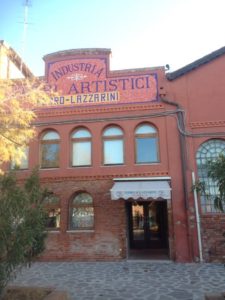 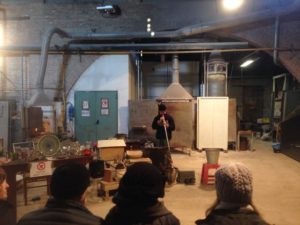 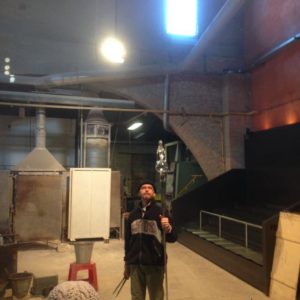 The building had been a monastery, which was destroyed by Napoleon, who also outlawed all the guilds (scuoli), fraternities, and religious organizations. The glass blowing trade is slowly dying because it is a difficult and hot job in the summer and it takes 15 years to become a master glass blower. Glass is still blown in the same way it was 3,000 years ago (except today they use gas to fuel the fires). Glass blowing was invented in the Syria and came to Venice 800 years ago. The factories were moved out of Venice to Murano to avoid the danger of fire in the city.  Minerals are added to the glass to create colors and many pieces are decorated with 14k gold.

We watched as a workman created first a vase and then a horse. 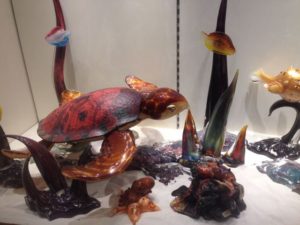 Then we toured the showrooms where, unfortunately, we were not allowed to take photographs. The prices are quite high, but just as we were leaving, we discovered the lower price room where I was able to buy a lovely vase for 20E.

Then we headed for St. Mark’s Square on a walking tour. First, we stopped at what is known as Vivaldi’s church. He was born in Venice in 1678 and was violin teacher and at one point head of the orphanage associated with the church.

Then we walked through the Greek quarter. In the 1500’s there were 10,000 Greeks living in Venice. 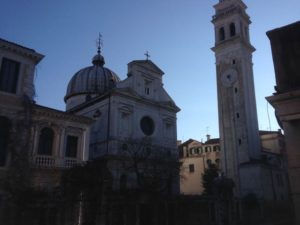 The Scuola Grande di San Marco is a gorgeous facade with inlaid marble and precious stones that dates back to the 1490’s. 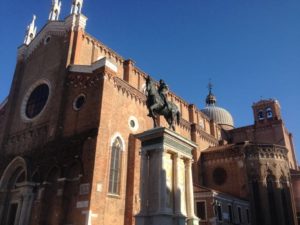 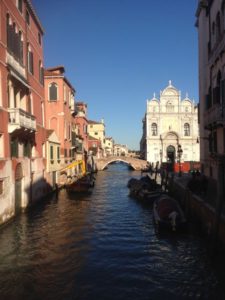 Napoleon outlawed the scuoli, and today the building houses the largest hospital in Venice.

One of the joys of walking through Venice is the gorgeous canals and bridges. 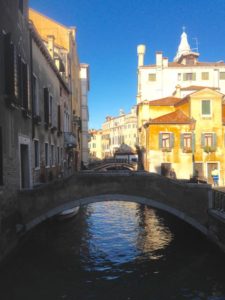 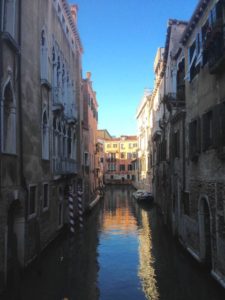 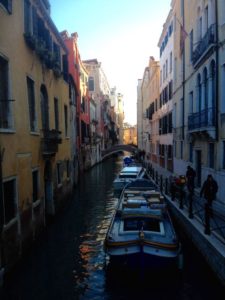 The Palace of the Dodges is limestone and pink marble. The Dodge was elected by the Venetian Assembly for a life term as head of the government. 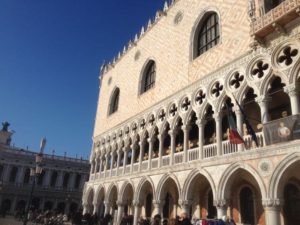 The Tower collapsed in 1902 and was rebuilt.

The Bridge of Sighs leads from the Dodges Palace to the prison. 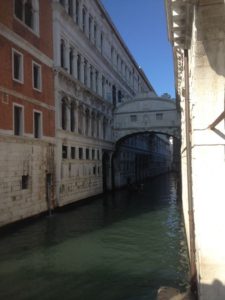 We were lucky that there were no lines to get into St Mark’s Basilica, a Byzantine church rebuilt in the second half of the 11th century and consecrated in 1094. The interior mosaic floors and gold mosaic domes and walls are the most spectacular we have seen. 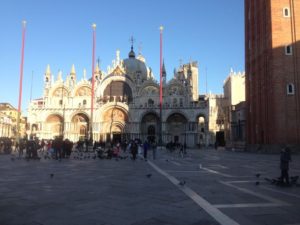 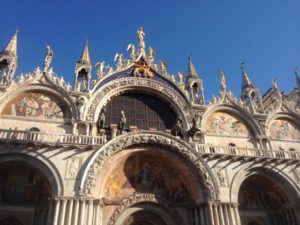 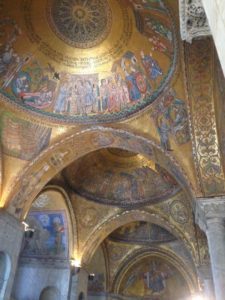 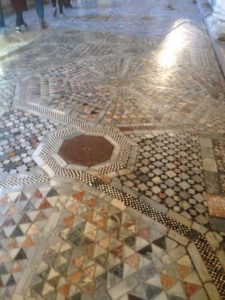 The clock tower is original and dates back to 1499.

We had a buffet lunch at the school of arts and letters near the Academia bridge. 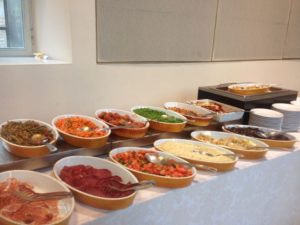 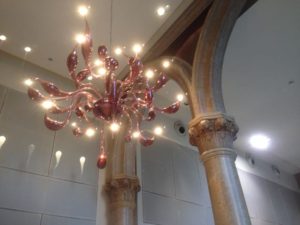 Every island has a campo (once grassy areas with wells) and almost every campo has a church and one or more wells that had to be filled in dry weather by barges bringing water from the mainland. 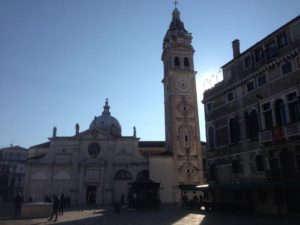 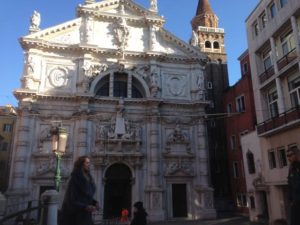 Another pleasure of any Italian city at Christmas is the elaborate shop windows. 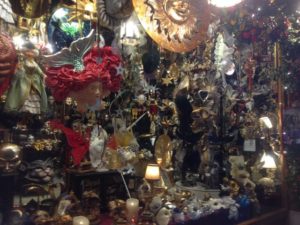 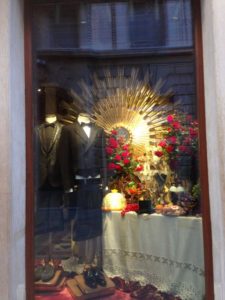 The Rialto Bridge is crowded even in winter, but it is still iconic. 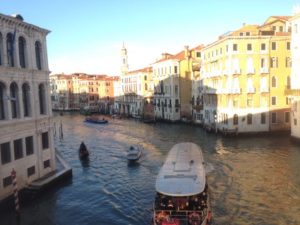 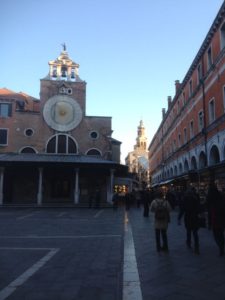 We had an early flight (6:30) am and we were glad we opted for the Gate 1 transfer to the airport. We were met by a representative and a water taxi at 4:00 am. The ride through the Grand Canal to the has to be the most memorable ever.