Today was a transit day, but we stopped at the Jade factory before going to the airport (another government showroom). We learned about the different qualities of jade. The highest quality is Jadeite, which is the hardest and most transparent jade and is generally mined in the rivers. The most prized colors are pale apple and lavender. Nephrite is a softer, less transparent jade, generally the green color we associate with jade, and is mined in the mountains near Xian. 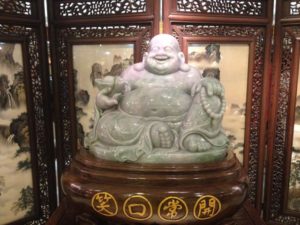 We flew to Wuhan in under two hours. Wuhan is a city of ten million people and is growing by one million people a year, so like in Xian, new apartment buildings are everywhere. 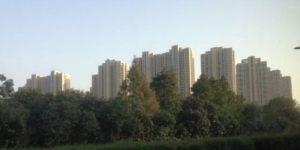 Once again our dinner was quite good, with many spicier dishes than we had in Beijing. As always hot tea and beer or soda is included in the meal. Our hotel is, like the others, unbelievably luxurious. 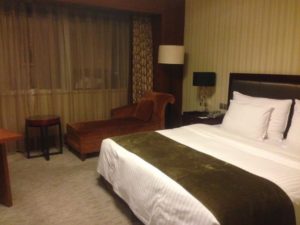 Our guide told us that there was a park next to the hotel where there is dancing, and we were glad we ventured out. The sidewalk beside the park was decorated with a dozen elaborate chrysanthemum flower displays lit up with twinkling lights. 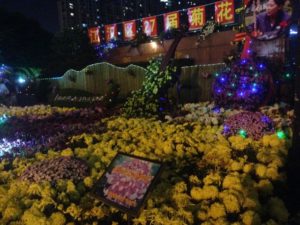 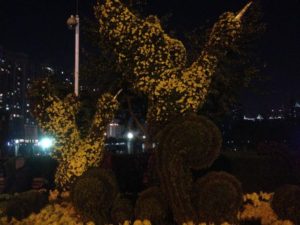 In the paved park beside a small lake, kids roller-skated and drove little wheeled carts while perhaps thirty women performed group exercise dances somewhere between tai-chi and aerobic ballet. It was a lovely scene and gave us a very different feel for the city.  A pedestrian walk circled the lake with upscale restaurants and bars facing the water–quite a lively scene. 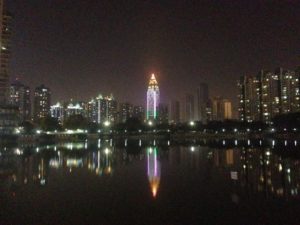 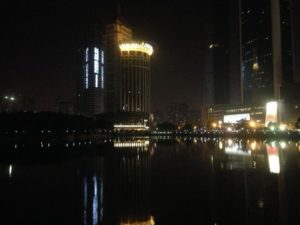