My purchase of a house in Nova Scotia came about somewhat by accident. For years we had vacationed on Bailey Island, Maine, in a restored 19th century stone house. I had dreamed of being able to stay longer than one week, but the house was expensive, as was every piece of property and house I looked at over the years.

Then in 2004, we extended our vacation by a week and took an overnight car ferry from Portland to Yarmouth, Nova Scotia. I fell in love with the landscape that first foggy morning we drove off the ferry and headed east along the southern shore. We drove through countless tiny fishing villages with fir-topped islands dotting the coast. The idea of looking for property did not occur to me until my friend, Paula, mentioned a 3×5 card she had seen thumbtacked to a bulletin in the Baeddeck post office advertising a three bedroom house on two acres for thirty thousand dollars Canadian, which at the time was about 75 cents to an American dollar. We did a loop of Nova Scotia and Cape Breton, and when I got home, I got on the Internet and found mls.ca, a site that allowed me to select which region of the island I was interested in and select what I was type of property I interested in (waterfront) and how much I wanted to pay. I spent three days on the Internet exploring hundreds of houses and found several I was interested enough in to book a ticket back up to look at them. 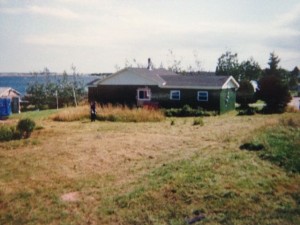 This is the house I fell in love with, not for the house itself  (it was 1950s fisherman’s house with no architectural details), but for the location. It overlooked a pristine harbor in a tiny fishing village. The lot also included a cottage and two sheds (one of which I instantly decided would be perfect for a studio). 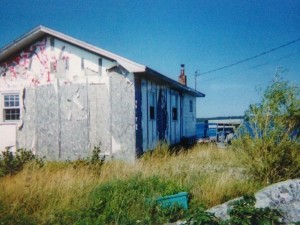 The cottage had never been finished (no exterior siding on the back part of the house and no interior walls, 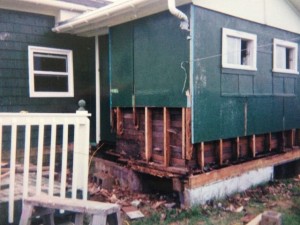 The house had been empty for several years and needed lots of work. I took what I look back on now as a huge leap of faith, but which at the time seemed like a deal that was too good to pass up. I put an offer on the property (less than most people pay for a car), and it was accepted. Next, I had to wait for a survey to show that the cottage was on my property, not the neighbor’s. I came home to a year-long sabbatical from teaching, and when I got word that the hurdles had been cleared, I flew back up, ready to go to work on restoring the house.

On my first night in the house, I ate a cold supper of smoked salmon, cheese, crackers, and grapes (that I had stupidly washed in tap water from a well that had not been used in over a year). That night I sat out in the back yard and watched shooting stars fall through the late summer sky and thought I was the luckiest and happiest woman on earth. In the middle of the night, I woke up sicker than I have ever been before. I was alone in a foreign country with no phone, and I thought I was dying. Luckily, by Monday morning when I was supposed to sign the contract for the house, I was well enough to drive to Guysborough, forty-five minutes away, and sign. The house was mine!

My next challenge was to find workmen to help restore the house. Luckily, there was no shortage of men willing and able to work on the project. Everyone in these small sea-side towns knows how to do everything, from carpentry to shingling to plumbing to roofing. I hired five guys (three of them brothers and one a nephew), and they went to work tearing out rotten wood, re-roofing the house and sheds, re-shingling the cottage, and putting in new and recycled windows the crew found for me. 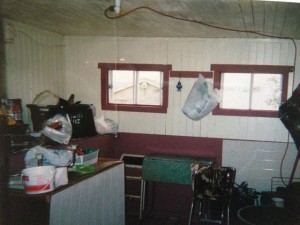 Inside of mudroom on house 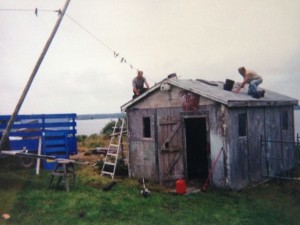 They recommended that I tear down the old shed, but I thought it would work for storage, so they put on a new roof, and the shed, later christened the Mancave by my sons, is still standing.

Jimmy Berry’s shed was dark and cluttered, but I saw its potential as a studio 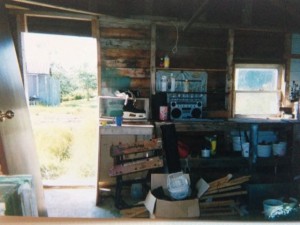 Jimmy Berry’s old fish shed was to become my studio. 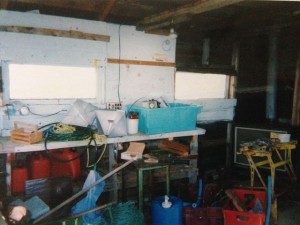 The shed wasn’t much to look at when we started 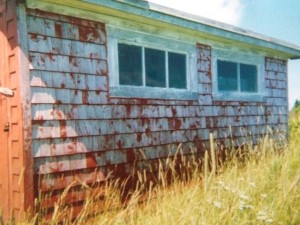 Outside of future studio. 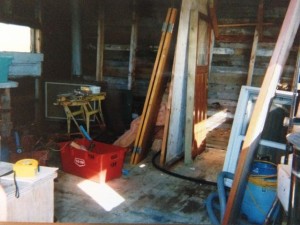 There was lots of rotten wood to tear out and insulation to replace. The old insulation was dried seaweed and cardboard. One of the many things I loved about the guys who worked on the house was their easy, joking camaraderie. They sang and whistled while they worked (I kid you not). 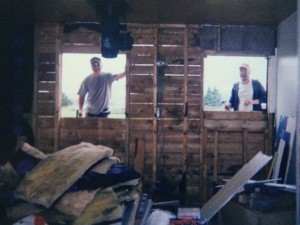 Inside of cottage under renovation 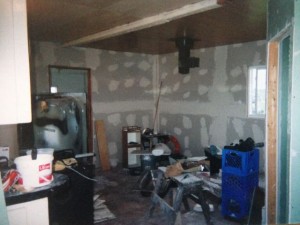 New interior walls in the cottage. 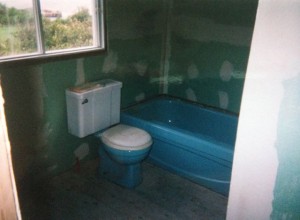 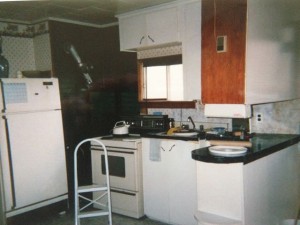 The cottage kitchen before 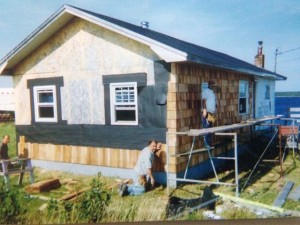 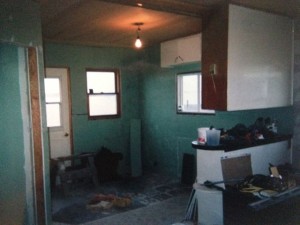 There was lots of rotten wood to tear out and insulation to replace. The old insulation was dried seaweed and cardboard.

Lawrence Horne redesigned the kitchen and bathroom in the cottage to open both up and give us more space. We kept the old fixtures in the bathroom (got to love that blue tub and toilet) and most of the old cabinets in the kitchen. 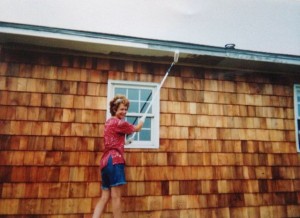 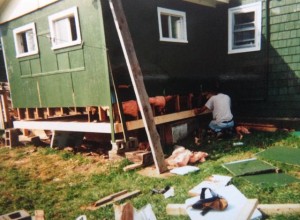 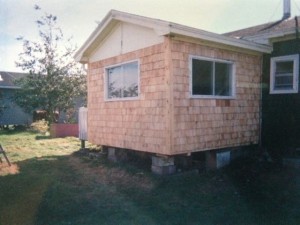 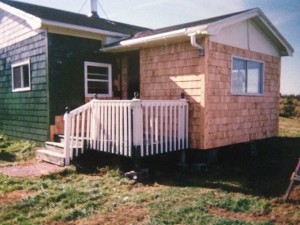 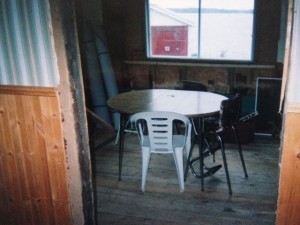 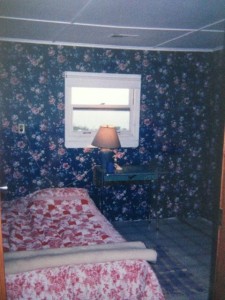 The bedrooms were small and dark 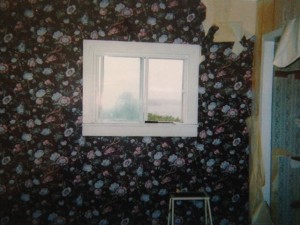 The dark floral wallpaper had to go 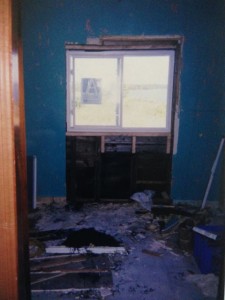 As restoration was proceeding, a hurricane threatened Gainesville, and my mother insisted I come home immediately (or I might not be able to get home). I found a last-minute ticket, dropped everything, left a week’s worth of wages on the table, and took off for the airport in Halifax with tears in my eyes at having to leave too soon. They guys kept working, finishing the job in my absence, and when I came back in the spring, the house was ready for furniture. I was glad I made it home when I did because two hurricanes in a row hit Gainesville. In spite of its relatively safe position in the middle of the state, Gainesville was hit hard. The first hurricane saturated the ground, and the second blew down hundreds of trees whose roots had been soaked and loosened. Once we cleaned up after the storm, I embarked on a quest to furnish both houses with thrift-store finds. I set out to spend as little as I could. More on that quest in another post.