To visit the narrower gorges, we boarded a smaller boat that took us from the new Wushan (the old Wushan is 100 meters under the water) through Dragon Gate gorge, Misty Gorge, and Emerald Gorge. 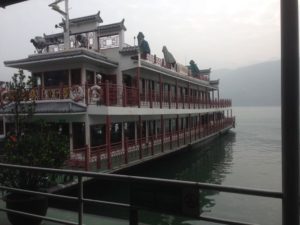 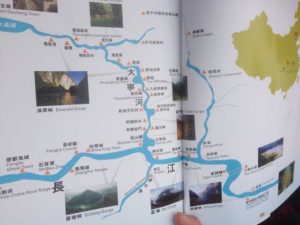 map of Yangzte with lesser gorges on upper left

It is hard to imagine how steep and tall the walls of the canyon are. 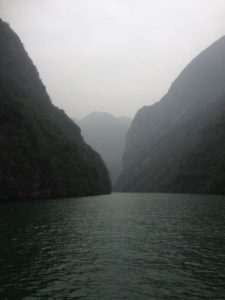 Our guide explained that the depth of the water used to be 6 feet with rapids in many areas, and trackers (men who pulled boats) had to pull the boats through with ropes. Because the clothes they wore were rough and scratched their skin, they worked naked (there were no women on the river in the old days). The ropes they used to haul the boats wore grooves in the rock over hundreds of years. When I realized how shallow the river was in the past, I understood how raising the water level helped with navigating the river.

Our local guide explained that although the young people were happy to move to Wushan with all of its amenities and infrastructure, many of the older people preferred to remain in the mountains and were allowed to remain in smaller settlements. Many of the houses are today abandoned because young people want to live in the cities.

We passed a coffin cave placed high on the cliff face to protect it from grave robbers. About sixty of the hanging coffins have been discovered. 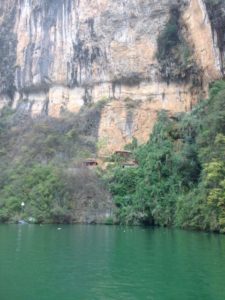 We also passed a Buddhist temple that had been built as a private fortress in the Ming Dynasty 400 years ago and was converted into a temple 100 yrs ago. Two monks still live there today.

That afternoon we passed through the last of the three gorges, Qutang Gorge, the narrowest of the gorges with the highest mountains. The mountains average over 1000 meters, and the tallest is over 1300 meters. 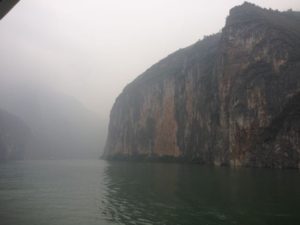