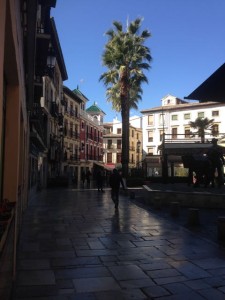 In 711 the Moors crossed the Straights of Gibraltar from North Africa and invaded the Iberian penninsula. They ruled southern Spain from Granada for almost 800 years until 1492 when Ferdinand and Isabella re-conquered Granada. Ferdinand and Isabella were buried in Granada. The streets are lined with fruit laden sour oranges (imported by Moors who used them to marinate fish and meat).

The Cathedral of Granada was begun in 1523 by Charles V, grandson of Ferdinand and Isabella. 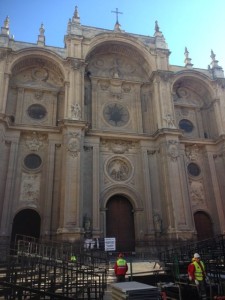 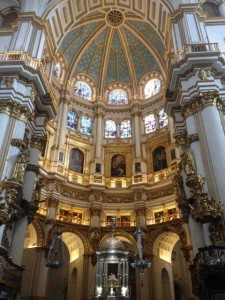 It is incredibly ornate, with dozens of Baroque side altars with sculptures and paintings. 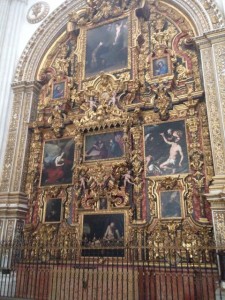 one of many side altars

The Alhambra, which means The Red in Arabic (from the color of the walls) was built late in the Moorish period (begun in 1238). It was the palace of the Sultans. It has over two kilometers of defensive walls and forty towers.

The people (as many as 50,000) lived in Albaicín, a walled city of whitewashed houses just below the Alhambra.

The first building one sees in entering the Alhambra is the Christian Palace of Charles V, with a Renaissance exterior modeled on the Piti Palace and a round interior modeled on the Coliseum and Pantheon, was begun in 1531 but never finished and never lived in. It was intended to have three levels on the interior but only two were completed and the dome was never added. 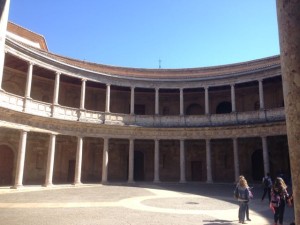 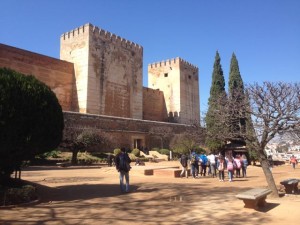 military fortress, one of the earliest buildings in the Alhambra 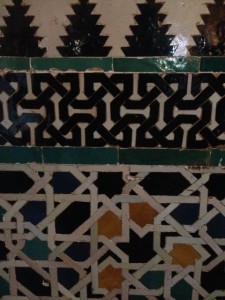 The lower walls in many rooms are of inlaid (mosaic) tiles, which kept the rooms cool and could be cleaned easily, but the upper walls and many ceilings are of intricately molded geometric designs and inscriptions from the Koran. 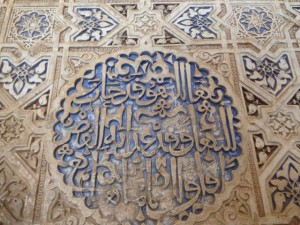 The ceiling and wall decorations are molded from a mixture of alabaster, marble, and plaster, and were painted in bright green, red, yellow, and blue.

The doors and many of the ceilings were of inlaid cedar, also painted in primary colors. The Hall of the Ambassadors has eighty pieces of cedar in the ceiling. 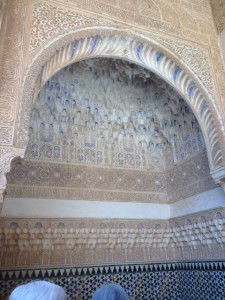 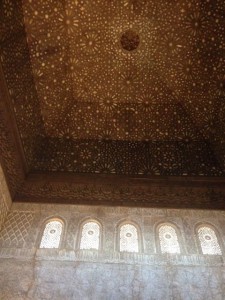 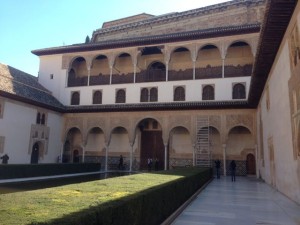 looking towards the palace for women

The Palace for Women has four chambers (for the four wives permitted by Muslim law) and rooms above for the concubines (Sultans were permitted as many as they could afford). 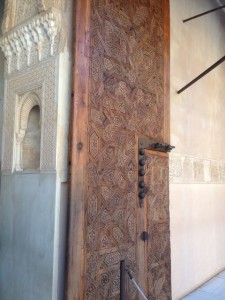 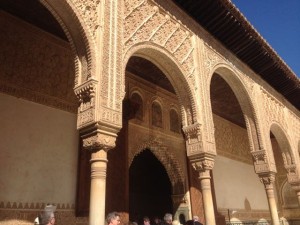 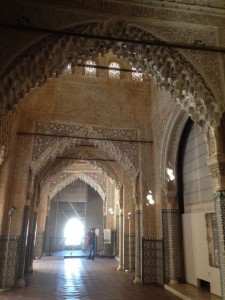 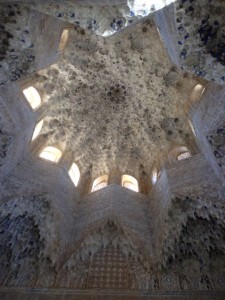 The dominant feature in the palaces is water, with fountains at the center of every room and courtyard. 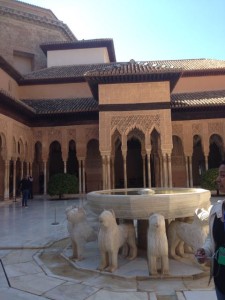 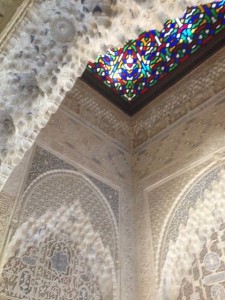 rooms of the Sultan’s mother

The water served for ablutions (Muslims must wash their face, hands and feet five times per day before prayers) and for cooling the rooms in hot summer months.

The Fountain of the Lions in the Sultan’s Palace (unusual because Muslims did not represent human or animal figures) was a gift of the Jewish community in gratitude for religious tolerance (all religions were allowed to practice their faiths freely). All of the water throughout the palaces and gardens is gravity fed from aqueducts that bring water from the Sierra Nevada mountains (snow covered) and the diameter of the pipes controls the water pressure to make fountain jets. The same water system is used today that was used in the 13th century. 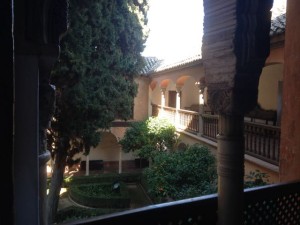 The Generalife (meaning the gardens of the Sultan) feature terraced gardens where vegetable and fruit trees are grown and there are many, many fountains and water features. 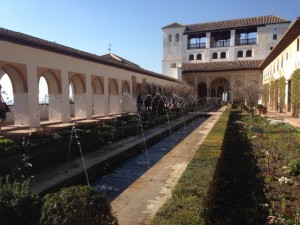 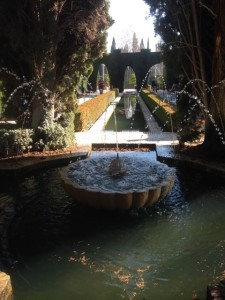 The Alhambra is truly one of the most spectacular sites in the world. 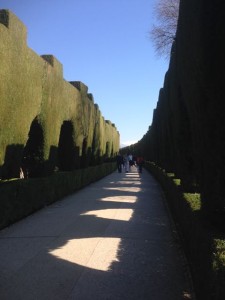 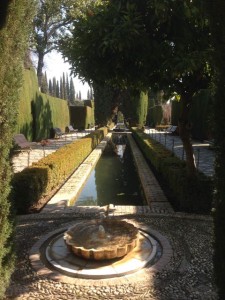