I found a wonderful twelve day trip to China through Sinorama tours, a Canadian company. I was a little leary at first because the price was so reasonable, $1600 for a ten day tour including airfare from Orlando. The reviews seemed positive, and so far I have been impressed with their organization and efficiency. We purchased seats with extra leg room, which meant bulkhead seats, for around $80 each, the best money we have ever spent. We were able to stretch out our legs and sleep for part of the thirteen and a half hour flight from New York to Beijing on Air China. We were met by the Sinorama representative and taken by bus to our hotel, the Lijingwan International, one of the most luxurious hotels I’ve been in, certainly on a tour. 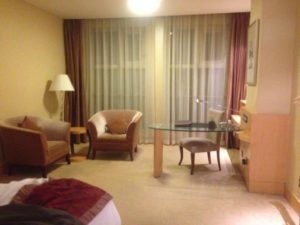 We discovered that we cannot get our email on gmail because China blocks Google and FaceBook, so no email while we’re here.