We took the high speed AVE from Madrid to Barcelona, covering the distance in 2hrs 40 min rather than the 9hrs it would have taken by bus. The train was sleek and modern, and we had no sense that we were traveling at 190mph. 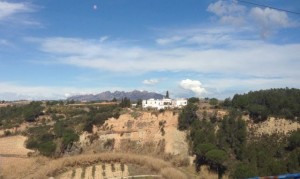 We crossed mostly dry barren land until we entered irrigated vineyards and almond orchards with the Monserat Mountains in the distance. 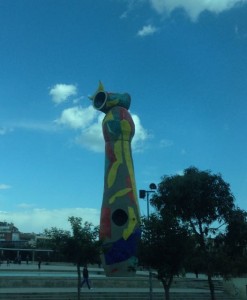 woman with bird by Miro 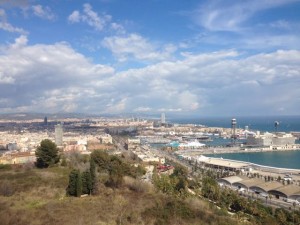 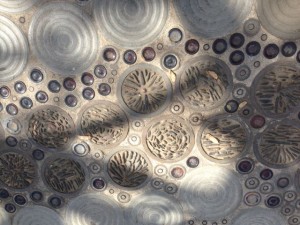 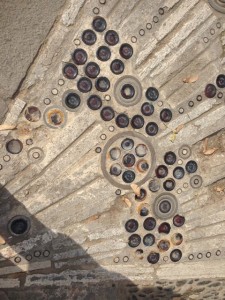 Barcelona is wedged between the mountains and the Mediterranean, so it is a densely populated city. On our way to our hotel, we toured Mont Juíc (so named because of the Jewish cemetery on the side of the hill) where the Olympic stadium is located. Wonderful views over the city and wonderful intricate inlaid river rock, tile, and bottle walkways. We were warned repeatedly that Barcelona is the capital for pickpockets, where professionals work in groups of three or four, so we were careful with our belongings. 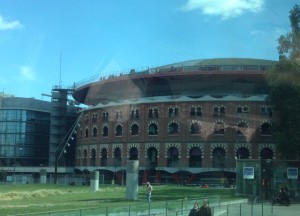 Bull fighting was outlawed in Cataluña several years ago, so the central bullring with its Moorish arches was turned into a shopping plaza with restaurants on the top level.

Since the 1992 Olympics put Barcelona on the map, it is now one of the five most visited cities in Europe, and Gaudi’s Sagrada Familia Basilica is the most popular destination in Spain, surpassing even the Alhambra in number of yearly visitors. 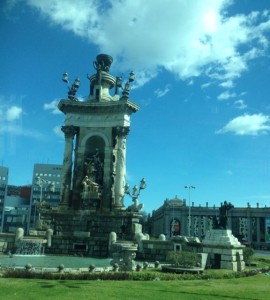 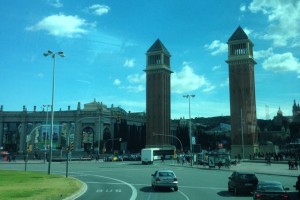 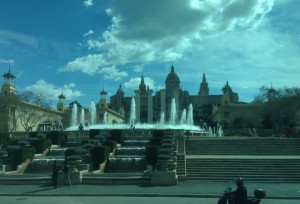 Many of the monumental buildings in Barcelona were built for the 1929 World’s Fair: the fountain surrounded by semicircular display halls and the National Palace flanked by Venetian bell towers. The palace has never served as a royal residence but is used for receptions and as an art museum. 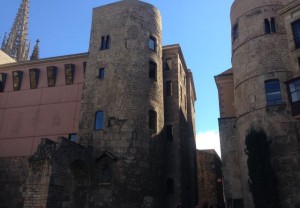 One segment of the 14th century Medieval walls still stands but the rest were demolished in 1854 when the old town with its tiny winding streets was expanded into the new town with wide streets that run parallel to the sea.

The Olympic Village replaced the old industrial area near the port (primarily textile production) and 2,000 residences for athletes were built (now apartments).

The Picasso Museum is free on Sundays, so we willing stood in line for an hour to get in to see a spectacular collection of his early (and later) works. He spent his youth here and began studying art at a young age (his father was an art instructor). By the age of fourteen, he was producing large traditionally realistic paintings, many of his family members. My favorite is the first communion of his sister. The museum also has his Las Meninas series, several rooms of paintings inspired by Velasquez’ Las Meninas in The Prado, which we had seen several days earlier. The museum ends with his ceramics and a collection of photographs of Picasso in his later years.

Politically, Cataluña has its own language and identity and wants to become independent from Spain.

During WWII, Spain remained a non-combatant although Franco had received arms and material support from Germany during the Civil War and Franco clearly sympathized with the Axis powers (so much so that he changed the time to the same as it was in Germany and Italy, which it remains to this day).

He allowed a volunteer force (about 18,000) to serve with the Germans on the eastern front, but specified that they could not fight against English or French troops. An even larger group of Spaniards (close to 80,000) volunteered to fight with the resistance in France. Late

Interestingly, although Jews had not officially been allowed to practice their faith publicly in Spain since the 1492, the 1929 proclamation offering Spanish citizenship to descendants of Sephardic Jews was used to save thousands of Jews in Hungary and Eastern Europe. Thousands of Jews were saved by giving them Spanish citizenship and over 25,000 were allowed to flee through Spain to Portugal and the West.